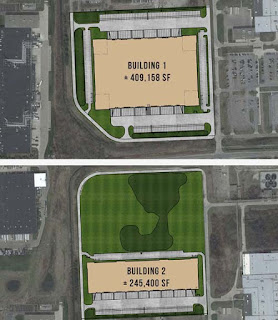 Members of the Romulus City Council approved four motions to clear the way for a $56 million redevelopment on Ecorse Road.
The development, to be called Ecorse Commons, will be located at 37530 Ecorse Road on property now owned by North Point Romulus Industrial, LLC.  The site includes more than 70 acres of land formerly owned by General Motors and includes two industrial condominium buildings totaling about 655,000 square feet, according to plans presented to the council members.
To accommodate the redevelopment plans, Romulus council members approved the termination and reliance of conditional zoning agreement which expired in 2019; an ordinance map amendment, the approval of an industrial condominium plan for the site and the request for concurrence of the Brownfield plan the developers submitted to Wayne County.

A spokesman from the developer noted that the property had been vacant for 10 years and that the redevelopment would create 400 jobs. The land, he said, is environmentally contaminated but will be remediated through the Brownfield Redevelopment plan submitted to Wayne County.
He told the council members that the site was “obviously in need of repair” but that North Point was looking forward to staring the “new life of the property.”
In response to questions from Councilmember Virginia Williams, the spokesman said that the developer would work with Wayne Country regarding traffic patterns in the area and planned “to do more” than the county required. “We want a good entrance,” he said.
Williams said she was concerned about the traffic in the area and said that “these crossroads are important” and asked if the developer would consider expanding the road in the area to alleviate congestion.
Currently, he reminded officials, that no taxes are being paid on the land and there are no jobs being created there.
The vote on all four motions requested by the developer were approved unanimously by council members.
Posted by The Eagle at 12:00 AM