Skydive to save lives

They took a leap of faith last Saturday when several members of both the Plymouth Noon and Wayne Rotary clubs jumped out of a plane at 14,000 feet.
The courageous club members followed the lead of District 6400 Governor Noel Jackson who organized the flight to fight polio and urged club members to secure pledges from friends, family members and strangers to ensure they actually jumped from the aircraft. To date, the Skydive for Police effort has generated more than $123,036 to the Rotary effort to immunize children and eradicate polio world wide. That total includes a two to one grant from the Bill and Melinda Gates Foundation, whose interest was piqued by the unusual fundraising effort.
The eradication of polio is a shared goal of the Gates Foundation and Rotary clubs worldwide.
Mackenzie Rediske of the Wayne Rotary Club made the leap as did Chuck Bares and Jan Eisen, both of the Plymouth Noon Rotary Club. The jumpers were cheered on by a crowd of well wishers, including families, friends and fellow club members.
The tandem jumps took some instruction before take off from the Dropzone location in Jackson.
Jackson, who initiated the skydives to generate funds and call attention to the effort, was on hand in his unmistakable Captain Rotary outfit which he wears for all the jumps in which he participates, which is most of them, he admits.  He has personally raised $4,700 in pledges for the effort.
To date, the efforts of the skydiving Rotarians have funded 205,060 doses of polio vaccine and funded the inoculation of 41,000 children. Getting the vaccine and the vaccinator to the children is more expensive than simply the cost of the two drops of vaccine, Jackson explained.
The first time Jackson, a Trenton dentist, jumped out of a plane it was at the behest of his office staff who presented him with a gift certificate for the adventure. Jackson enjoyed the sensation so much that he agreed to do another jump, with Shiva Koushik, a Rotarian friend in nearby Windsor, Ont.  As the pair were waiting for their second jump, their wives suggested enlisting other jumpers and raising pledges for polio eradication.
That first effort in 2014, generated $15,000 in pledges and another $30,000 from the Gates foundation. Since then, the effort has been flying high.
Since 1985, when Rotary committed to polio eradication, the organization has contributed more than $1.5 billion and countless volunteer hours to immunize children against the disease. In that time, the number of polio cases has dropped 99.9 percent, and only three countries remain where the virus has never been stopped: Afghanistan, Nigeria, and Pakistan. While World Polio Day, Oct. 24, serves as an important opportunity to remind the world of the need to finish the job, raising money and awareness is a year-round effort for many. 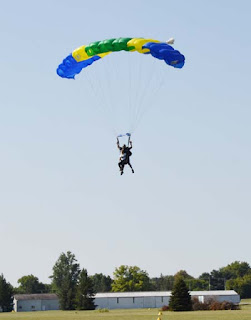 On July 10, 10 members from Toronto Skyline and surrounding Rotary clubs plunged earthward in their own tandem skydive, raising several thousand dollars for polio eradication.
Jackson said he had a sure-fire way to recruit Bares, Eisen and Rediske.
“I would go up to people and tell them we were skydiving for polio and give them two options,” says Jackson. “I would tell them I was paying $180 out of my own pocket to jump, so if you are not going to jump, you have to pay $180. Most people would say, 'OK, you got it.' “
The budget to see zero cases of polio for three years, the requirement to have the world certified as polio free, is $1.5 billion.  Rotary had pledged $50 million a year for the next three years and The Gates Foundation has pledged to match the Rotary donations up to $50 million a year for the next three years, or 33 percent of the total budget, National governments and public health organizations from around the world have pledged the balance of the costs.
Posted by The Eagle at 12:00 AM