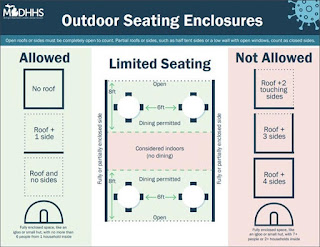 The Class C liquor license at the bar and restaurant was suspended Dec. 23 due to non-compliance with current state health department restrictions regarding indoor dining.

Following a hearing last Wednesday, Administrative Law Judge Michael St. John ruled the suspended liquor license at the vendor could be reinstated when the facility was fully compliant with the Michigan Department of Health and Human Services restrictions on indoor dining.

Officials from three separate agencies inspected the tent which had been erected in front of the building in an effort to comply with outdoor dining requirements imposed as part of the state health department efforts to control the spread of COVID-19. All three agreed the makeshift tent violated the regulations as it was completely enclosed. State rules require that the outdoor tents for dining service must have three open sides if there is a roof. The airborne spread of the virus cannot be controlled in an enclosed space, according to medical experts who designed the new rules.

Officials recorded visits to the Plymouth ROC six times between Dec. 3 and Dec. 17 before taking action Dec. 23 to suspect the liquor license at the establishment. An inspector from the Wayne County Health Department ordered the removal of both the roof and one of the walls of the tent on Dec. 3, according to county officials. While the restaurant managers agreed to make the changes, the removal did not take place, state officials said.

The judge ordered the bar and restaurant closed until fully compliant with the state rules. He said the owners had only to notify the liquor control commission that the bar and restaurant was in compliance to begin the process of reinstatement. He told the owners that inspectors would review the site to ensure that it met the required standards which would then allow for the reinstatement of the suspended liquor license.

To comply, the roof at the outdoor tent can remain, but no two walls can touch and tables must remain 6-feet from each other.  The Downtown Development Authority in the city recently emailed a graphic to all business owners showing exactly what the specifications  are.