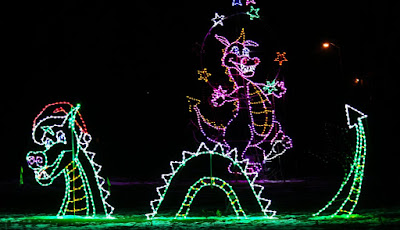 Area residents took a dim view of traffic problems at the Wayne County Lightfest in Hines Park this year. The 4.5 mile attraction, which featured more than 47 giant animated displays and more than one million lights, prompted an armed road rage confrontation along with multiple complaints about traffic back ups and road blockages.

Members of the Westland Police Department were dispateched to the entrance of the attraction on Merriman Road Dec. 13, to try to alleviate some of the traffic snarls between Ann Arbor Trail and Warren Avenue.

Tempers flared so badly during the traffic snarls at the event, that one family was threatened by man brandishing a handgun while waiting in line Dec. 19. Police are still seeking the passenger of a red Dodge Charger who threatened the family waiting in line at the intersection of Hines Drive and Outer Drive in Dearborn Heights. Witnesses said the driver of the car, a black woman in her mid-20s, shouted profanities at passengers in another vehicle. A Black man in the passenger seat of the Charger also shouted profanities at the other vehicle while pointing a black handgun at the occupants. Dearborn Heights Police are still seeking the pair.

Westland officers worked with the Wayne County Parks Division and Wayne County Sheriff deputies during some of the heaviest traffic last month to attempt to control the backup issues at the extremely popular 27-year-old exhibit. According to a prepared statement, those efforts “should result in significant improvements.”

Residents, however, are not convinced.

Bridget Walker who lives on a street that she said is constantly blocked, called the situation “beyond ridiculous, especially this year. The fire station is constantly blocked as are the main intersections followed by residential streets,” she posted on social media. She suggested moving the entrance to the attraction near Farmington and have the waiting line go down Hines and back up to Newburgh.

The Lightfest, which was open Wednesday through Sunday during the holiday season, was more popular than ever this year, officials said, which may have accounted for some of the problems. Historically the event averaged around 1,800 cars on Friday, Saturday and Sunday nights. This year the event averaged around 3,800 vehicles each night it was open.

As a result, officials said,  there has been a great deal of traffic backing up onto Merriman Road and there have been backups as far south as Ford Road and as far north as Plymouth Road affecting Westland, Garden City and Livonia. The backups are not a result of traffic getting into the park, but the volume of cars actually inside the event, officials said. The traffic flow inside the event is constant and slow moving.

Previously, the Lightfest route took visitors down Merriman to Hawthorn Drive, then to Hawthorn Park Drive, then onto eastbound Hines Drive. In an effort to alleviate the traffic problems, the route was altered to send traffic onto Hines Drive. The route will first travel west on Hines to Nankin Mills. Vehicles will then loop around back onto eastbound Hines. This will allow approximately 1 mile of traffic inside the park rather than on Merriman Road.

Officials said last week that the changes had shown “a great improvement.”

Another neighbor who lives on Ann Arbor Trail said that cars were parked in the center lane waiting to enter the exhibit which prevented residents from turning into or out of subdivisions or driveways. Nearby resident Alyson Tusek called the situation earlier this month a “nightmare.”

More than 20 other nearby residents posted complaints and accounts of the traffic tie ups on social media.

Wayne County officials did not issue any plan for route changes or comment on the situation by press time this week.