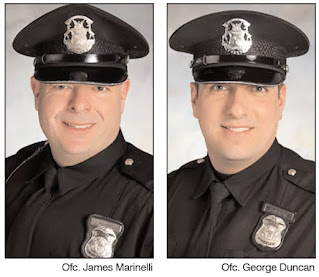 Two veteran officers of the Canton Township Police Department will retire this month.

Marinelli was assigned as a road patrol officer responding to calls for service, initiating contact with individuals and participating in the community policing practices of the department. During his career, in addition to his patrol duties, Marinelli was active on numerous special units including Evidence Technician, Range Officer, Field Training Officer, Fire Investigation Unit, Special Enforcement Unit, and as an investigator in the Canton Detective Bureau and on a multi-jurisdictional Narcotics Interdiction Team.

Marinelli has the distinction of being the first former member of the department Explorer Unit to be hired as a police officer. The Explorer Unit is a program designed for teens interested in a career in law enforcement - a unit he would later serve on as a mentoring officer.

Officer George Duncan will also retire this month. Duncan began his career with the department on Sept. 11, 2000.

Duncan worked his way into being one the department's range experts, working with his fellow officers on weapons training and annual qualifications. Last year, he was selected as the first Training Coordinator in the department, in charge of all training department-wide.

“These two law enforcement officers possess individual attributes that have made them valued employees,” said Chad Baugh, director of police services. “While they will be missed, we wish them the very best in their retirement, extending our sincere gratitude for their distinguished years of service they've devoted to protecting and serving Canton.”