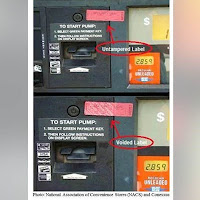 State officials recently found credit card skimmers in pumps at eight gas stations across Michigan, including one in Belleville and another in Canton Township.

Michigan Department of Agriculture and Rural Development (MDARD) weights and measures inspectors discovered the skimmers, which are inside pumps, during a routine inspection blitz, according to a prepared release from state officials.

The skimmers make copies of customers' credit card information which can then be sold or used to make fraudulent purchases.

Skimmers were found at: FlexxMart, 496 Main St. Belleville and at the Sunoco gas station at 40200 Michigan Ave. in Canton Township.

“These criminals continue to try and use gas pumps to commit theft and steal your personal information for fraudulent use,” MDARD Director Gary McDowell said. “These inspections are just another way MDARD is protecting Michigan consumers at the pump. Kudos to our weights and measures staff for their vigilance in protecting consumers pocketbooks and personal identification.”

“The station owners had security measures in place to protect their patrons such as security tape,” said Craig VanBuren, MDARD lab division director. “Unfortunately, the thieves cut, broke, or removed the tape. It is important that both the stations and customers remain vigilant at the pump when using a bank or credit card.”

While the skimmers can't be seen from outside the pump, if a pump looks like it has been tampered with, notify the store clerk and do not use your card to pay. Additionally, try to use pumps closer to the store because skimmers are often placed in pumps farther away from the store, state officials advised.

Customers are advised to monitor bank and credit card statements for unauthorized purchases. Erroneous or compromised information should be reported to the issuing bank, officials said.