Voting in local elections is crucial to democracy 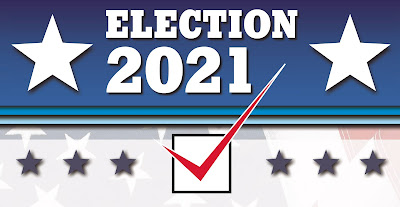 If there's one thing Americans have learned in the past couple of years - or should have - it's that voting is one of a responsible citizen's highest priorities - or should be.

Let us hope that no American qualified to vote ever shrugs off the responsibility, or the opportunity, thinking a lone vote won't matter.

Every vote matters in every election, whether the contest is local, state or national.

If you have an interest in any particular issue, wouldn't you feel more "entitled" to express your view on it if you have, at the very least, voted for or against the person who will eventually oversee it?

We put quote marks around "entitled" because, as Americans we are of course entitled to express an opinion, regardless of the depth of our commitment. But having voted shows without a doubt that we care about our system and how it settles questions of public concern.

Don't we want important decisions to be made by people who assuredly understand our side of the issue, whether openly agreeing with us or not? We at least want to be sure of competence and clear thinking in settling the question.

Which means we must not only be willing to vote but to take the time to learn on which side of the issues each candidate stands.

And, let's give credit to people willing to run for public office, whether it's for a school board, a local government or something higher. They are taking on some obligations and responsibilities that most of us wouldn't consider.

Early voting is already under way and Election Day is next Tuesday, Nov. 2.

Voting is still a sacred privilege and responsibility. Now, it is also a deeply desired one.

(Editor's note: A version of this editorial ran in the Plattsburgh Press-Republican. We agree with its sentiments.)

On the ballot in our local communities are the following decisions for voters:

Vote for not more than 2

Shall the Taylor School District, County of Wayne, State of Michigan, borrow the sum of not to exceed One Hundred Thirty Million Dollars ($130,000,000) and issue its general obligation unlimited tax bonds, in one or more series, for the purpose of paying for the cost of the following projects:

• Erecting a new High School building and Career Center building which will include athletic fields and parking lots;

• Erecting additions to and remodeling of the current High School for conversion to a Middle School;

• Remodeling, equipping, re-equipping, furnishing, re-furnishing school buildings, athletic and play fields and other facilities to create a modern learning environment for students, for safety and security and other purposes;

• Acquiring and installing instructional technology infrastructure and equipment in school buildings and other facilities; and

• Preparing, developing and improving sites at school buildings, athletic and play fields and other facilities?

The maximum number of years any series of bonds may be outstanding, exclusive of refunding, is not more than thirty (30) years; the estimated millage that will be levied to pay the proposed bonds in the first year is 3.64 mills (which is equal to $3.64 per $1,000 of taxable value); and the estimated simple average annual millage that will be required to retire each series of bonds is 3.64 mills annually ($3.64 per $1,000 of taxable value).

If approved by the voters, the bonds will be guaranteed by the State under the School Bond Qualification and Loan Program (the “Program”). The School District currently has $0 of qualified bonds outstanding and $0 of qualified loans outstanding under the Program. The School District does not expect to borrow from the Program to pay debt service on these bonds. The estimated computed millage rate required to be levied to pay the proposed bonds may change in the future based on changes in certain circumstances.

(Pursuant to State law, expenditure of bond proceeds must be audited, and the proceeds cannot be used for teacher, administrator or employee salaries, repair or maintenance costs or other operating expenses.)

IN THE CITY OF NORTHVILLE:

Vote for not more than 2

IN THE CITY OF PLYMOUTH:

Vote for not more than 4

Vote for  not more than 1

Vote for not more than 7

Shall the City amend Section 2.7, 6.12, 6.13, and 11.10 of the City Charter to allow for the publication of legal notices and minutes of Council, Board, and Commission meetings in two electronic sites or in a newspaper of general circulation in the City and for the reappointment of the official publications by Council every odd year beginning calendar year 2023?

This proposal will allow the school district to continue to levy the statutory rate of not to exceed 18 mills on all property, except principal residence and other property exempted by law, required for the school district to receive its revenue per pupil foundation allowance and renews millage that will expire with the 2022 tax levy.

Shall the currently authorized millage rate limitation of 18.5980 mills ($18.5980 on each $1,000 of taxable valuation) on the amount of taxes which may be assessed against all property, except principal residence and other property exempted by law, in Huron School District, Wayne and Monroe Counties, Michigan, be renewed for a period of 10 years, 2023 to 2032, inclusive, to provide funds for operating purposes; the estimate of the revenue the school district will collect if the millage is approved and 18 mills are levied in 2023 is approximately $2,375,000 (this is a renewal of millage that will expire with the 2022 tax levy)?

Vote for not more than 4

You can register to vote

Some clerk's offices have opened satellite offices for voter registration. You must show proof of where you live. Documents must have your name and current address. You can show a digital copy of any document. Acceptable documents include:

After registering, you can vote an absent voter ballot at the clerk's office or you can vote at your polling place on Election Day.

To be eligible to register to vote you must be:

• Not currently serving a sentence in jail or prison