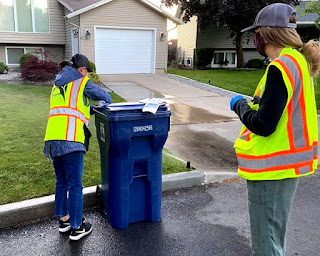 It's a dirty job, but Canton Township will get it done.

In an effort to eliminate contamination in curbside recycling carts, township personnel will conduct a Quality Improvement Program beginning in April.

Officials explained that contamination occurs when non-recyclables like food waste to plastic bags are placed with the recyclable material in the carts. Recycling loads with contamination are rejected from the recycling facility and sent to the landfill and when the landfill fills up, the waste will have to be hauled to a facility further away which will dramatically increase collection costs to residents.

Officials explained that similar inspection programs around the country have reduced the amount of contamination by an average of 35 percent.

Beginning April 19, crews will begin inspecting residential recycling carts placed at the curb. It will be a non-invasive search with crew members simply lifting the lid to glance inside. Crews will be specifically looking for garbage or bagged recyclables; plastic bags or plastic wrap; cords, hoses or chains; food or liquid (this includes greasy pizza boxes); hazardous waste or needles.

If any of these contaminates are discovered in a resident's cart, they will be issued a warring tag listing the specific contaminate found. Should the contaminants be found during a subsequent inspection, the cart will be rejected and left at the curb. Collection can resume the following week, as long as all contaminants are removed from the cart. This is an eight-week program with each home in Canton being inspected four times, officials said.

Residents will receive two direct mail pieces before the program begins with detailed information. Additional information can also be found in Focus newsletters and on the website.

Officials also reminded residents to rinse off containers and cans before placing them in the recycling cart.