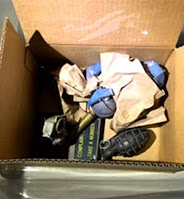 The Michigan State Police Bomb Squad was called to a Canton Township home last week when a box containing grenades was discovered.

According to police, the box of military souvenirs was discovered when a family was cleaning out the Canton home of a relative. They immediately called local police and when officers responding to the home determined the items were, in fact, grenades. They called the state police bomb squad. The grenades were found to be inert.

“This family in Canton Township did everything right,” state police said.  A spokesman said that it is not unusual for family members to find similar items among souvenirs or keepsakes of relatives.

Too often, they handle the explosive devices and take them to the local police department or state police post which is dangerous.

“The first thing you should do is stop,” Michigan State Police warned. “Don't take any chances! Just leave them alone and call 911. They will take it from there,” police said.

The discovery of such items has often caused some concern in local police departments where unsuspecting family members deliver them in an effort to dispose of the explosives. In the City of Plymouth, there was a sign posted on the door at city hall instructing residents not to bring any suspected explosive devices into the building.