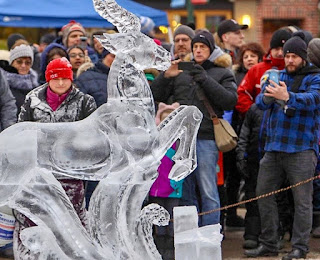 One of the coolest events in the area will take place this week as carvers install about 65 ice sculptures throughout downtown Plymouth placed strategically to promote social distancing.

This will be the 39th year for the event which will return to the basic concept for the festival which originated four decades ago. It was started in 1982 by a small group of local businessmen and community leaders who hoped to attract crowds to downtown Plymouth to help bolster business during the usually lackluster sales time. The event grew to include massive ice sculptures in Kellogg Park, live entertainment, collegiate and professional ice carving contests and the famous dueling chain-saw ice carving competition. The  festival earned an international reputation among professional carvers who competed at the event which drew nearly 500,000 people to the city during the three-day weekend. 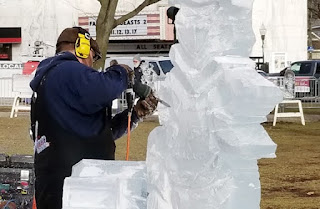 The festival has faced some challenges during the past four decades including inclement weather and financial difficulties during the economic downturn. As the event was continuing to grow and include attractions like free skiing lessons, a petting zoo, pony rides, fire and ice obelisks and a party tent, unprecedented warm temperatures and rain last year during the weekend left many of the ice sculptures nearly unrecognizable. This year, health precautions due to the pandemic had all but cancelled the event until, once again, a few community members stepped in to persuade James Gietzen, president of JAG Entertainment which produces the event, to give it a try.

Gietzen said he had to be persuaded to attempt to produce the event this year but is now more than confident it will be a success. “It is smaller, but it is really worthwhile,” he said.

“People are really looking for something to do, a family activity to get out of the house at this time of year,” Gietzen said. “We won't have the huge sculptures, or any sculptures in the park,” Gietzen said, “but we will have, thanks to our sponsors, about 65 or 70 smaller sculptures throughout the downtown area in front of local businesses. Those will be available for the public to view 24 hours a day,” he added. The three-day festival officially opens tomorrow, Feb. 12 and continues through Sunday, Feb. 14.

Gietzen said he will miss many of the events that have become a tradition at the event, as will the professional and college carvers who would compete. “We've postponed those competitions until next year,” Gietzen said, “and while people are disappointed, there isn't anyone who doesn't understand the need to practice social distancing and avoid crowds while the pandemic continues.”

Gietzen said he reached out to the major sponsors of the event who agreed to help fund the smaller “Ice Festival Lite” this year. The smaller sculptures, which will each begin with a 350 pound block of ice, will be installed on the city sidewalks at distances that will allow safety for spectators.

Gietzen said he was somewhat surprised at how fast the event came together this year and at the enthusiasm with which the plans have been greeted.

“I think this year especially people are really looking forward to getting out with their families. The sculptures may be smaller this year, but I am sure people will be amazed at what these carvers can do,” he said.

Gietzen said the event would not be possible without the sponsors who accepted the challenge of the smaller event.