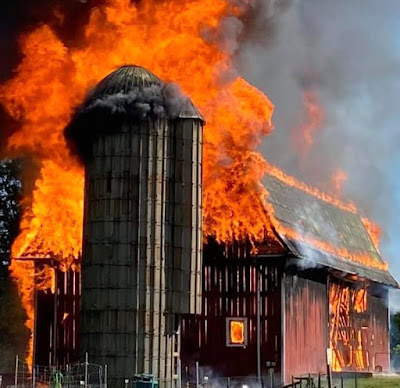 An investigation into the fire that completely destroyed the historic Cady-Boyer Barn last Sunday afternoon is under way, according to fire officials.

The barn served as a museum and community gathering venue and was the site of the Farmers Market every Sunday. Only last week, a new pavilion was opened at the site.

The Cady-Boyer Barn was originally built before the Civil War by one of the first township supervisors, David Cady, and was then enlarged and remodeled in 1908 by Aruna Cady, one of the pioneer families in Canton.

Historians determined that some of the timber posts were cut prior to the Civil War in saw mills operated by water wheels.

The barn was eventually sold to the Plymouth-Canton School District, and was used as the Rotary School Farm from 1970-1981. School district officials planned to tear it down to install tennis courts when the community stepped in. A donation from local historian and businessman Bob Boyer funded the move of the barn from the original location at Joy and McClumpha roads.   Amish craftsmen were hired to dismantle the barn and rebuild it at the Ridge Road site and it was restored in 2006.

To complete the restoration, Amish craftsmen from Homer, MI took the structure apart and numbered each piece. The pieces were spread out on the field at the new site and reassembled using the numbering, according to historical accounts of the work.

Dave Curtis of the Canton Historical Society said the loss of the farm was extremely sad and that a historical aspect of the township has been lost. He reportedly said he hopes the structure can be replaced through donations and fundraising efforts.