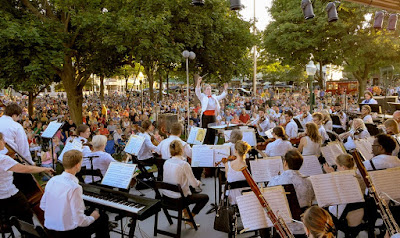 The return of live music to the community is nearly here with the long-awaited return of the Michigan Philharmonic orchestra to the stage for a pair of outdoor summer performances.

The celebration of live music includes two family-oriented performances featuring a patriotic salute to America as well as a selection of both classical and pop favorites and several movie themes. The first show will take place beginning at 7 p.m. June 26 at Kellogg Park in downtown Plymouth with a second performance planned for 7 p.m. Saturday, July 10 in Kensington Metropark.

The Plymouth show, “An American Salute,” features an array of patriotic-themed pieces including the “Star-Spangled Banner,” George Gershwin's “Strike Up the Band,” as well as a Duke Ellington arrangement, “Colonel Bogey March,” an armed forces, “Stars and Stripes Forever,” highlights from the movie “Rocky” and Tchaikovsky's 1812 Overture.

“A Summer Celebration,” is planned for the Maple Beach area in Kensington Metropark, featuring a number of selections from the Kellogg Park performances as well as music from “Back to the Future,” and  “Black Panther.”

“This past year and a half robbed our community of the chance to share live music together,” said Philharmonic Executive Director Beth Stewart. “Now we're thrilled to be back live in the community and invite everyone to share the joyous sounds of live music being performed.”

The Philharmonic will begin the 76th season this fall with a “Take2Celebration,” offering eight performances between October of 2021 and May of 2022.

These live performances begin with a “Blockbuster Birthday Bash” in October and will feature two world premieres, a unique mandolin composer, a famed jazz guitarist along with a steelpan soloist, a night of traditional holiday pops at the historic Penn Theatre and much more.