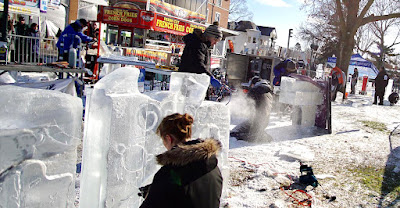 Better late than never and in the case of the upcoming Plymouth Ice Festival, even better a little later in the year.

The 40th annual event is set for Feb. 11, 12 and 13 this year rather than the traditional mid-January celebration of all things winter. Organizer James Geitzen of JAG Entertainment which produces the event said a number of factors prompted the schedule move, the most important being the weather and the current COVID epidemic. In his decade of producing the festival, he said he has seen years with temperatures too cold for crowds and years it was too warm for the ice carvings which prompted consideration of the move to February. The current COVID Omicron statistics, too, may have lessened within the next weeks, something Geitzen and his crew are hoping happens.

Geitzen added that organizers learned a lot during the festival last year when the pandemic was raging and then temperatures impacted the ice, along with rain.

“Last year, because of COVID, we spread the ice carvings out throughout the downtown,” he said, “and people seemed to really enjoy that. The merchants in town, too, were happy with the response from the crowds. The festival really made a positive impact on the entire community last year at a time when people needed a break.

“We got so much positive feedback from everyone involved last year,” he added. “It was a good experience for everyone.”

Geitzen said that positive response from both merchants and crowds was a real inducement to move the event this year. Using the entire downtown area leaving space between the outdoor sculptures will provide an added level of safety for visitors.

“People need to get out. We've all sort of been locked up for so long,” Geitzen said. “This is safe, it's outdoors and it's fun for the whole family. I think it's people's nature to want to get outside and this festival gives people a chance to remember all the good things about being outside and the good things still going on in the community despite the virus.”

He added that the festival would be safe, no matter what the COVID levels might be because it was outdoors and people could determine their own level of contact.

“We suggest wearing a mask, too, depending on the numbers, but people will have that choice since we are outside on the public sidewalks and the sculptures distanced.”

There will be a few larger ice sculptures in Kellogg Park as usual, but even those will be further apart to ensure safety. Those won't be the huge carvings the festival has sometimes featured as the professional carvers will be concentrating on smaller, more unique and intricate sculptures throughout town. Those will be displayed in front of businesses and attractions throughout downtown. Geitzen said at this early date, he estimates a total of 80 to 100 sculptures.

The Gathering will again host the Hot Spot where visitors can warm up and enjoy the festival food from the vending trucks which will be on site. The Petting Farm for children will be back this year along with several family attractions.

“Last year, during the pandemic, so many people came out and the businesses got the shot in the arm they really need at this time of year.  I think this festival makes a positive impact on the community at a time they really need it,” Geitzen said.

The proximity to Valentine's Day and the “big” football game aren't lost on Geitzen, either. “It's perfect for couples to come to the festival and see the ice before they celebrate the holiday,” he said. “And families can visit the festival before they go to watch the game on Sunday.”