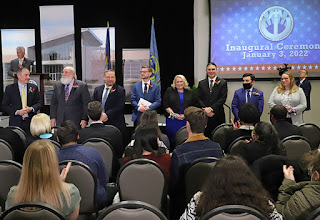 William R. Wild was officially inaugurated for his fourth term as mayor of the City of Westland Jan. 3.

“It is an honor to continue to serve as mayor of the All American city of Westland,” Wild, said. “I look forward to the next four years working closely with the City Council to improve the lives of Westland residents.”

The inauguration included swearing in for three current member of city council and one newcomer. James R. Godbout, first taking office in 2000; James Hart who first assumed office in 2018; Peter Herzberg in 2016 and the newly-elected councilwoman Melissa Sampey, who officially took office Jan. 1, 2022.

“We should all be active in the community some way or another. Sometimes that's on city council; sometimes it's on boards and commission; sometimes it's your local civic groups. But I've always encouraged everybody to be active in any way they can and I've always encouraged my children to be active. If you guys hang around any city events, you'll always see some of my kids running around because they are just as bought into this and just as dedicated as I am,” said Hart.

“Over the last six years since being on council, I've been able to learn so many things and really being in public service has been the most rewarding thing I've ever done and I enjoy it. I'm honored to do it and I'm looking forward to the next four years,” said Herzberg.

“I'm standing here as a brand-new councilwoman and many people said 'she can't and she won't do it.' But it only takes one person to believe in you and I was very lucky I had so many people in my corner who believed in me and supported me,” commented Sampey.