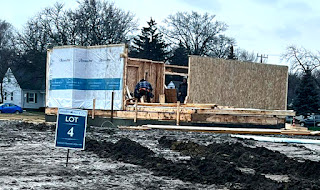 Twelve of the 22 homes planned at the former Kiwanis Park in Wayne have already been sold, according to a recent social media post from officials.

Infinity Homes, developer of the project, is currently constructing houses on John Street, near the intersection of Annapolis and Howe in the city. According to Rino Soave, owner of Infinity Homes, this is the first project in the City of Wayne. He said his company “does a fair amount of work right across the road in Romulus-we've probably built well over 350 homes in Romulus in the last seven or eight years,” he said during a Wayne City Council meeting last fall.

Soave said Infinity Homes specializes in houses for first-time and upgrade buyers, and said the Kiwanis development will be affordable. “Our market interest is under $300,000, that's what we're pretty waded into,” Soave told the members of the city council. “So, this will pretty much fall right into that niche.” Soave said he expects the highway access and everything downtown Wayne has to offer will make the space attractive to potential residents, as well.

Members of the council also approved an 18-month agreement with Infinity Homes to develop the spaces formerly known as Sue Winn Park, Vandenberg School and Angelo Demario Park during the October meeting.

“We're really excited to be bringing a new development of housing to the City of Wayne,” Soave said. “I think the city has been really welcoming to us.”