Library will mark century of service to community 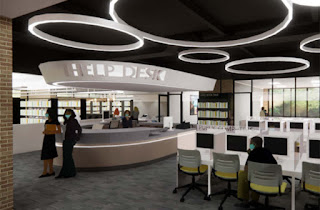 Things have certainly changed at the Romulus Library during the past century of service to the community.

The library will mark 100 years in the community this year and multiple celebrations and programs are planning to mark the anniversary, according to Library Director Patty Braden.

The Romulus Library Center opened on Wednesday, Nov. 7, 1923 and was initially housed inside O.H. Raether's Confectionery store in downtown Romulus. The library opened with a collection of only 204 books, Braden said.

According to a history of the facility compiled by Diane Hazen, a member of the Romulus Historical Society, the owner of the store agreed to manage the library for $3 a month, if the community would furnish bookshelves.

Officials of Romulus Township, as the community was known then, opened the facility with a $20 annual budget, with other costs paid by Wayne County. By 1924, Raether's payment was increased to $5 for month due to the number of books used at the Romulus Library Center.

By 1930, the library had 580 books and in 1938 had an annual circulation of 6,633. As patronage and use continued to increase, the library was housed in township hall and then on Goddard Road under the direction of first Librarian Marion Morris. By 1951, the library had again doubled in size and again needed larger quarters.

That growth in service has continued during the past century and today, the library offers thousands of books and media in all formats and serves more than 40,000 residents.

“Throughout the years, the library has remained a cornerstone in the community, providing educational and entertainment resources and a gathering place for Romulus and Huron Township residents of all ages,” Braden said.

Celebrations will include a community-wide scavenger hunt, special programs for all ages, and a Centennial Celebration in the fall.“We can't wait to see you all throughout the year to celebrate this amazing milestone. Happy 100 years,” Braden concluded.