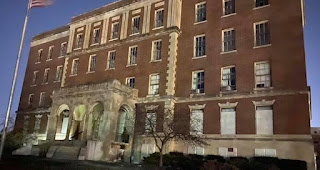 Plans for the redevelopment of the Eloise Psychiatric Hospital have been bolstered by a $695,000 grant from EGLE (State Department of Environment, Great Lakes, and Energy).

Plans for the redevelopment at the former psychiatric hospital have been under way since John Hambrick, managing member of 30712 Michigan Avenue LLC, purchased the site from Wayne County for $1 in 2018. The city of Westland has partnered with Hambrick's development company to redevelop the site as part of a multi-phase project. When complete, according to plans for the development, new commercial establishments, a hotel and a restaurant bar will join the preserved historic buildings and the haunted attraction at the site. Total development costs are estimated at more than $4 million and the first phase of development could be complete in 2026.

The development will be completed in phases and will include the preservation of two historic buildings on the property while other structures at the site, including the former bakery and power plant, will be removed.

The recently awarded state grant is designated as funding for brownfield remediation of contaminated soil at the site, according to a prepared statement from the state office. Petroleum-related compounds apparently leached into the soil from underground storage tanks, according to the prepared statement. The EGLE grant will fund the excavation, transport and disposal of the contaminated soil.

“We are very grateful to EGLE, the city of Westland and the State of Michigan for this grant. It will assist us in the redevelopment of this challenging project,” noted Hambrick. Westland officials have said in the past that another economic benefit of the project will be the drawing power of the development which could spur more traffic and attention in the area.

The property was operated as a psychiatric hospital until 1979 and then as Wayne County General Hospital until 1984. The property was completely self-reliant and at one time served 10,000 patients and 2,000 employees with necessary utilities, farming, and service providers located in 75 buildings on the 900-acre site. Most of the buildings have been demolished although the remaining buildings, including the Kay Beard building, were the topic of a horror movie and remain an attraction for paranormal investigators.