Mayor William R. Wild's final State of the City address last week was also a tribute to his 16 years as mayor of his home town.

Congresswoman Debbie Stabenow and Gov. Gretchen Whitmer were among the elected officials, dignitaries, friends and family members who offered best wishes and congratulations during the event, praising Wild for the many accomplishments and successes during his mayoral tenure. Wild was the guiding hand in the construction of the award-winning new city hall, reclaiming and renovating a former big-box store. Wild helped create the city police transparency website and during his terms of office oversaw more than $60 million in road reconstruction and repair in the community. During his address, he also proudly mentioned the Westland Shop and Dine district and the popular farmers market. Wild said that thousands of Westland residents were vaccinated against COVID-19 as part of a city effort. He also proudly displayed images of the new playscape and splash pad at Tattan Park in the city. 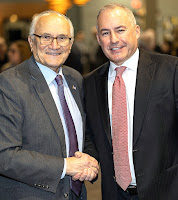 Wild was also dedicated to support for the Norwayne neighborhood in the city and was instrumental in bringing recycling to the city. He is credited, too, with bringing diversity to the city hall staff and the community.

Wild's presentation included videos of the city and officials dating back to 2007, when he first became mayor after serving on the city council. Wild was raised in Westland and graduated from John Glenn High School. He is leaving the mayor's office to become president and CEO of the Midwest Independent Retailers Association, based in West Bloomfield. He thanked his family for their unwavering support during the past years and emphasized that none of the accomplishments and progress in the city could have taken place without the efforts of his staff and the other elected officials. He outlined many projects currently in the planning stages or under way in the city which will be complete in the near future.

“It is an honor to be mayor of your home town,” he told the enthusiastic audience. 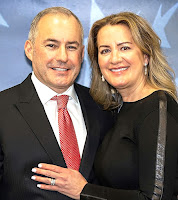 Wild's address met with a standing ovation from the crowd who heard video tributes from both Stabenow and Whitmer, praising his leadership and accomplishments. Whitmer expressed her gratitude for Wild's leadership, which, she said, “extends far beyond Westland to reach Lansing and Washington, D.C.”

Current City Council President Jim Hart Hart spoke for the members of the council during the event and expressed the gratitude he felt for Wild's contributions to the community.

There were also tributes to Wild from Wayne County Commissioner Al Haidous and leaders from other communities who praised his leadership and his accomplishments.

Members of the city council were expected to appoint a mayor to serve until November when voters will choose a candidate to complete the remaining two years of Wild's term.