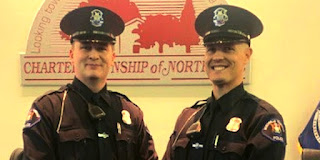 Officer Derrek Jennings and Ofc. Justin Clenney were sworn in by Deputy Clerk Katie Anderson in front of their family members and township staff last Monday.

Jennings previously worked for the Davison City Police Department, the same community where he grew up. He was a police officer there from March 2016-December 2021, serving as a firearms instructor and a field training officer.

From 2014 to 2018, he also was a Davison firefighter from 2014-2018. He holds part-time positions as an officer for the Dryden Township Police Department and the Mount Morris City Police Department.