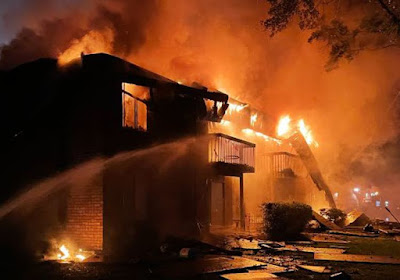 Members of the Westland Fire Department have organized a Gofundme page on Facebook to help the 33 families displaced by the Aug. 4 fire at Westwood Village Apartments in the city. Firefighters responded beginning at about 11:20 p.m. after a call about smoke in the hallway. Firefighters attempting to evacuate the residents were forced out of the building hallways by the rapidly expanding fire moving through the attic space. Firefighters battled the blaze for 12 hours before bringing it under control. There were no injuries reported, officials said.  Affected families lost all their belongings in the blaze. Firefighters, led by Jeffrey Stobbe, organized the page to help the displaced families, hoping to raise $3,000 to help them. Last week, about $10,065 had been collected, officials said, as they thanked all those who contributed.
Posted by The Eagle at 12:00 AM