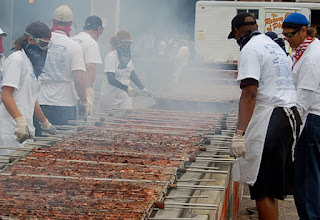 Preparation of the traditional beloved chicken dinners at the Plymouth Rotary Club Chicken Barbecue this year will include something new, along with the “secret seasoning” and genuine charcoal grills.

This year, all COVID safety protocols will also be in place, explained Brandon Bunt, chairman of the Rotary Club Chicken Barbeque Committee.  Actually, Bunt rose through the ranks of the committee to become chairman last year, but the pandemic canceled the barbecue for only the second time since the event began in 1956, moving the committee assignments forward a year.

“Our big thing is to stress public confidence,” Bunt said. “We will be doing health screenings and temperature checks of everyone participating in food preparation. We want people to feel safe.”

Bunt stressed the importance of the event to the entire community, as this is the major fundraiser each year and the club usually sells about 10,000 dinners.

“I cannot stress strongly enough the community impact of this event,” Bunt said, “especially on the volunteer groups.”

“Our biggest impact is the funding of education for students to attend college and vocational schools,” Bunt said. “That takes a huge chunk of the money.”

Every chicken barbeque chairman agrees that the event could not happen without the work of the teens and their advisors from local schools.

Volunteer students from the high school athletic teams and various clubs actively participate in the preparation of the barbeque dinners, cleaning the corn on the cob, packaging the meals and a multitude of other necessary jobs. All volunteers will adhere strictly to health safety protocols, Bunt stressed. The Rotary Club donates generously to the clubs in return for the students' hard work during the day-long event.

Bunt said he expected there to be the same number of dinners available for sale at the regular $14 price although discounted pre-sale tickets are available from Rotary Club members for $12 until Aug. 16.  The dinners, which will begin to come off the huge charcoal grilling pits behind The Gathering at 11 a.m. Sunday, Sept. 12, include a half a barbequed chicken, using the famous secret seasoning, corn on the cob, a roll with butter, a bottle of water and a cookie. The club will, as usual, fill Kellogg Park with picnic tables for those who want to enjoy the Sunday chicken dinners in the sunshine.

Take out dinners will be sold at West Middle School and tickets will be available at the Rotary Ticket Booths along Main Street during Fall Festival weekend, Sept. 10, 11 and 12.