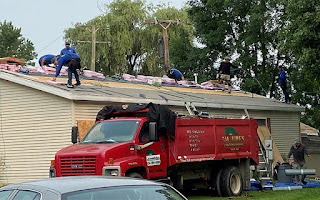 Army veteran Carson Middlebrook and his family stayed warm and dry in his Canton Township home during the recent rainstorms that pummeled the area.

Just in time to avoid the heavy downpours, Tittle Brothers Construction in partnership with Habitat for Humanity installed a roof at Middlebrook's home on Aug. 6.

The repair was part of the Owen Corning National Roof Deployment Project that offers new roofs to service members in need. Candidates for the program are selected by Habitat For Humanity and the program includes veterans of all military service organizations.

Home owner and U.S. Army paramedic Middlebrook, who served multiple deployments to Iraq during his 14-year military career, also served tours of duty in Korea, Germany, Ireland “and a lot of places in between.” He said he applied for the program because his roof was leaking and in serious need of repair. He said Dr. Lynn Phillips, CEO of the Fallen and Wounded Soldiers Fund told him about the program and suggested that he apply for help. After a representative came to visit the Canton Township home, Middlebrook's property was determined to be a strong candidate for the program.

Middlebrook said his home really needed the new roof as there had been leaks with the recent storms. He said the entire situation demonstrated how many people there are who are willing to help.

The cost of the roof materials and labor for Middlebrook's home and garage was estimated at about $13,000 and it is expected to last about 50 years. The Roof Deployment Project has helped nearly 300 military families in 14 states, officials said. For more information on the Roof Deployment Project, or to learn more about how to get involved, email roofdeployment@owenscorning.com. More information on Tittle Brothers Construction and Habitat for Humanity can be found on their official websites.