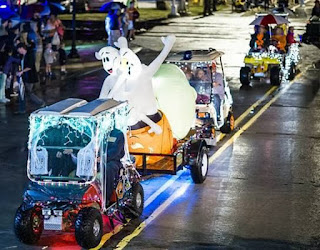 Another step out of the shadow of the COVID pandemic is planned in Romulus with the 23rd Annual Pumpkin Festival set for Sept. 17, 18 and 19 this year.

The festival is a three-day event that traditionally begins the third Friday in September with the Rotary Club Parade of Lights, where everything is aglow, from bicycles to cement trucks. Thousands of people line Goddard Road to view the parade, organizers said. This year, as always, there is no fee to enter the parade, although preregistration is required. All entries must be decorated with working lights, “the more the better” according to Rotary Club members.

The street festival offers music, food, crafts, and games for all ages, explained Merrie Dryor, director of activities and TIFA for the Romulus Downtown Development Authority. The Pumpkin Festival also includes a Classic Car Show, a Craft and Vendor Show and live music, along with other events, games and activities.

In addition, there are advance contests for Pie Baking and Canning. Those entries are due at the Romulus Senior Center, 36525 Bibbins St, by 2 p.m. Sept. 9  Winners for each of these contests, judged by Romulus senior citizens, will have their names displayed at the festival and on Facebook. All pie entries must be homemade and must be pumpkin, sweet potato, peach or apple. Canning entries accepted this year will be only tomatoes, green beans, pickles and fruit.

Entries in the digital photo contests are due no later than Sept. 10 and include Cutest Baby entries, Cutest Pet photos and Best Decorated Mini Pumpkin. Winners in these contests will win a prize but only one submission per person is allowed in each contest. The public will vote on the winners on the city Facebook page the week of Sept. 13. . Digital photo entries can be submitted to the Facebook page @DowntownRomulus or emailed to cbradley@romulusgov.com. For information on submission, call (734) 942-7545.

“Our downtown Festival is a celebration of friends and family; a harvest celebration that generates an enthusiastic spirit and regenerates our sense of community,” Dryor said.

The festival will take place at the Romulus Historical Park located at 11147 Hunt St. and in downtown Romulus along Goddard Road.

Entries into the Parade of Lights are already being accepted. There will be six categories this year for parade honors: Commercial, Motorized, Non-motorized (people or animal powered), Classic Cars, Live Music and Schools. The parade line up will begin on Goddard Road, west of Wayne Road this year and the parade will begin a 8 p.m. Friday, Sept. 17.

For an application and a complete set of rules, visit facebook.com/Romulus Rotary.

Volunteers are needed, vendor applications are being submitted and donations are being accepted to ensure the event will be a success this year. For questions or more information, call the Pumpkin Festival Hotline at (734) 955-4577.

The Pumpkin Festival Committee meets on the first Tuesday of the month at 6:30 pm at city hall council chambers located at 11111 Wayne Road.