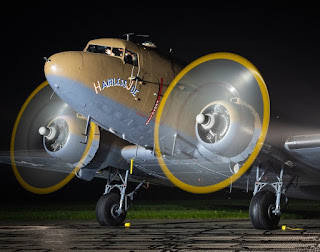 Yankee Air Museum will be flying its UH-1 Huey Greyhound helicopter on Saturday, May 29 and Hairless Joe, the C-47 troop transport on Sunday, May 30 in celebration of the Memorial Day holiday weekend.

“We are encouraging everyone to take a ride on the adventurous side this holiday weekend,” exclaimed Kevin Walsh, president and CEO of  Yankee Air Museum.  “Our World War II era C-47 and Vietnam era UH-1 Huey are each the venerable workhorse of the conflict in which they flew.  People flying on these aircraft pay homage to the men and women who sacrificed so much for us.  Their support keeps us flying.”

Hairless Joe is the Douglas C-47 Skytrain, painted to honor the 1st Air Commando Group flying missions in the China-Burma-India Theater of World War II.  Hairless Joe is named in honor of the C-47 flown by Lt. Col. Dick Cole who was co-pilot to Jimmy Doolittle in the famed Doolittle Raid of April 1942.  C-47s were often the tip of the spear during World War Two, inserting paratroopers behind enemy lines prior to massive invasions, including D-Day and Burma.

The unmistakable sound of the Bell UH-1 helicopter rotor struck fear in the enemy, and hope in the hearts of the wounded in Vietnam, Walsh said.  The UH-1 was affectionately called the Huey and it was the game changer of the United States Army, landing soldiers into battle and evacuating the wounded. The Yankee Air Museum owns and operates a combat veteran of the 240th Assault Helicopter Company, known as the Greyhounds,” Walsh added.

“The museum works hard to preserve and protect aviation artifacts, and it is expensive,” said Walsh.  “Our Air Adventures and these living history experiences create lasting memories.  A ride on a warbird is something to scratch off your bucket list and write into your history.”

Air Adventure rides on the Huey are available every 15 minutes beginning at 11 a.m. Saturday into the afternoon.  Rides are $99 for an 8-minute flight.  These flights originate from the north lot of Yankee Air Museum, 47884 D Street, in Belelville.

To book a flight visit www.yankeeairmuseum.org and click on “Fly With Us.” Additional flight times may be added, on both days, as customer demand warrants.

Yankee Air Museum will be closed on Memorial Day, May 31.