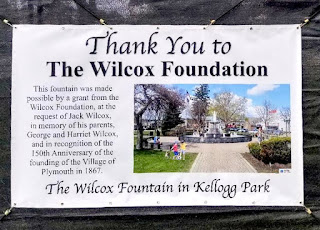 Don Howard, Staff Writer
Construction is currently under way behind fabric fencing in Kellogg Park where a new fountain is being installed, replacing the iconic structure that has been a city symbol for half a century.

The installation of the new fountain was mutually delayed by City of Plymouth officials and administrators at the Wilcox Foundation for a year, due to the COVID-19 pandemic.

Members of the Downtown Development Authority (DDA) revealed initial plans and designs in April 2016. It was the hope of the DDA to have major upgrades to both the park and the fountain in time for the 150th anniversary of the city. After public input and study, the design by Russell Designs of Northville and WESCO Fountains of Florida was selected.

Funding for the fountain construction and installation was made possible by a grant agreement between the city and the Wilcox Foundation in the amount of $1,170,449.10. Commissioners also authorized the expense of an additional $30,000 for the fountain project. The approved funding was in addition to the previous authorization of $20,000 in funding from the Downtown Development Authority bringing the city contribution for the fountain to $50,000. At their meeting earlier this month, city commissioners also approved the expense for installation of benches as part of the Kellogg Fountain replacement.

According to a recent statement from the DDA, demolition of the 50-year-old fountain is now complete and general contractor Shaw Construction of Livonia is now working on site preparation and utility connections.

“This project has been a long time coming,” said Mayor Oliver Wolcott. “It's only because of the generosity of the Wilcox Foundation that we'll be able to see it come to fruition.”