Order in the court 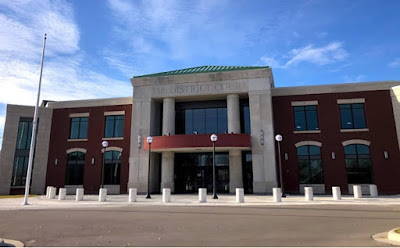 Court is now in session, sort of.

Officials from the area celebrated the official dedication of the new 50,000 square foot 34th District Court in Romulus last Monday, although many court procedures are still being handled electronically due to pandemic restrictions.

The court serves the host city of Romulus, as well as the City of Belleville, Van Buren and Sumpter townships and Detroit Metro Airport. The court also handles week-end arraignments for Wayne County and some 149,000 people visit the facility each year.

In announcing the dedication during the regular city council meeting last Tuesday, Burcroff said this major undertaking had really been a team effort with all those involved.

“This was a long-time in coming and COVID slowed things down,” he told the council members. “There are so many people to thank for all their hard work on this.”

Burcroff singled out Building and Safety Director Bob McCraight for his work on the project and said “This is a success because of Bob's help.” Burcroff added that the project success was due to the hard work of everyone involved including the city legal and financial departments, the construction and development contractors, the judges at the court and the court staff.

“I think it is important for the Romulus residents to know  how blessed we are to host the courthouse,” he said. “I am looking forward to moving forward,” he added.

The new courthouse, almost twice the size of the previous 26,000 square-foot facility built in 1974, is considered “state of the art” by Partners in Architecture, the firm chosen to design and oversee construction at the two-story, four-courtroom building. A spokesman from the company said the new building prioritizes safety and security through the separation of public, semi-secure and secure spaces.

The existing court building remained operational utilizing remote capabilities during the pandemic and construction of the new courthouse.

The new building includes security screening of visitors at the entrance before individuals proceed to either the transaction counter or the three primary courtrooms and magistrate serving civil, traffic, criminal and probation departments at the court.

The new building features terrazzo flooring and wood trim to ensure that the stature and importance of the court environment is protected.

Costs for the new court, estimated at $20 million, were not paid by municipal taxes, authorities stressed, but by court fees and bonding. About five years ago, the court began assessing a $20 fee per traffic ticket or infraction which was dedicated to the anticipated debt reduction of the bonds used to finance the project. The City of Romulus, as the host community, issued the bonds. “There will be no cost to taxpayers unless they are cited for a ticket,” city officials said in a prepared statement.

The new building is located on the municipal campus on Wayne Road where Romulus City Hall and the library are also situated.