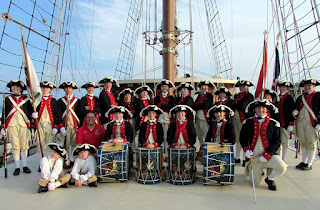 All former members, parents and instructors are being sought to join in marking the half-century of the founding of the non-profit group dedicated to preserving the ancient arts of color guard, fifing and drumming. The students, ages 12-18, perform all year at parades, historical and patriotic celebrations, concerts, cultural affairs and other civic events.  The music spans the 17th to 20th centuries with an emphasis on music played during the Revolutionary War.

Past and current members and families are invited to the gathering for a picnic lunch and jam session from, 11 a.m. until 4 p.m. Saturday, July 31 at McClumpha Park in Plymouth. Email pfdcpics@gmail.com for ticket information or find them on the PFDC 50th Reunion Facebook page.

The students in the fife and drum corps also perform in nearby states like Ohio and Indiana and have traveled to Canada to celebrate their historic art.  Each year the corps members also go on tour and perform at Revolutionary War historical sights and national landmarks across the country.