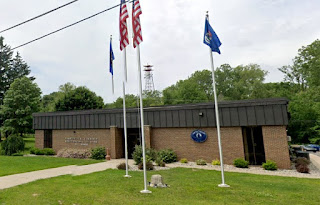 Members of the Sumpter Board of Trustees are facing a $3 million decision after being told it could cost $27,500 to replace the doors at township hall.

During a study session of the trustees last week, board members were told that the replacement of the front and rear doors at township hall would cost nearly $30,000 due to the corrosion and wear on the parts, prompting Trustee Don LaPorte to question the wisdom of spending that amount of money. LaPorte suggested exploring the possibility of repairing the current doors and suggested that the expertise of Supervisor Tim Bowman might help determine if repair rather than replacement would be possible.

Bowman said he had worked with Crawford Door, the company providing the estimate, for many years and that he was sure that even with the significant corrosion the doors could be repaired.

“I think the doors can be fixed,” he said, “but this building needs a roof before doors. I'm sitting in my office looking at ceiling tiles. We need to pay more attention to the roof than the doors.”

Bowman added that all the township buildings are not up to date and were constructed in the 70s. “The flow is like a fox den,” he said.

“I see people coming in here all the time trying to find departments.” He suggested that there were some potential drawings of a structure which could house all the township operations in one building that might be available.

Trustee Tim Rush agreed but noted that the board members should still explore some type of repairs to the current doors. “A new township hall would take time. It could take 2 or 3 years,” he said.

Trustee Matt Oddy said that while the township had installed an Americans With Disabilities compliant door in the rear of township hall, one was still needed in front.

“An expansion would take 3-5 years and cost $3 million. We would have to fund that with a millage, a bond issue or something,” he said and reminded the board members that the township does own the property next door to the south of the current building.

“The bottom line is price,” commented LaPorte. “It shouldn't be a hard sell. We are in need of a new building.”

Rush reminded the board that the superior bond rating the township currently enjoys would be beneficial should they make the decision to proceed with plans for a new building.

“It is time to start looking at that,” Bowman said. “All the township buildings are in bad shape.”

Trustees voted unanimously to remove the door replacement expense from the agenda and have Bowman explore repair options.