A day to remember

Holiday pays tribute to those who have served our country 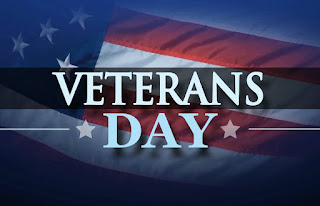 Veterans Day gives Americans the opportunity to celebrate the bravery and sacrifice of all U.S. veterans. However, most Americans confuse this holiday with Memorial Day, which specifically commemorates those who died while in service of their country and made the ultimate sacrifice.

What's more, some Americans don't know why veterans are commemorated  on Nov. 11, although in recent years it has become "politically correct" to say to veterans, as well as to frontline workers, "thank you for your service.'

But what does it mean when we thank veterans for their service? Unlike Memorial Day, Veterans Day, which became a national holiday beginning in 1938, pays tribute to all American veterans - living or dead - but especially gives thanks to living veterans who served their country honorably during war or peacetime.

As for the date the holiday is observed, we celebrate veterans on Nov. 11 because that is the anniversary of the signing of the Armistice that ended World War I.

Veterans Day evolved from Armistice Day, which was proclaimed in 1919 by President Woodrow Wilson. Armistice Day recognized the end of World War I when hostilities ceased on Nov. 11 at 11 a.m., 1918, the 11th hour, of the 11th day, of the 11th month. That date is now Veterans Day.

What do you need to know about celebrating Veterans Day? Here's some more information.

Is Veterans Day on the same day every year?

When first celebrated as Armistice Day, the day marked the end of World War I, formally recognized on the "11th hour, of the 11th day, of the 11th month" in 1918.

Today we continue to celebrate the day as Veterans Day, still recognizing the original tie with Nov. 11. That means Veterans Day is on the same day every year - Nov. 11 -- regardless of on which day of the week it falls. When the date falls on a Saturday or Sunday, government officials or businesses may recognize it on both the official day and the following Monday.

Is Veterans Day a federal holiday?

Do schools close on Veterans Day?

Veterans Day has extra meaning for the Veterans of Foreign Wars of the U.S. and all of our nation's veterans because 100 years ago, on the 11th hour of the 11th day of the 11th month in 1918, the Great War - the war to end all wars - finally ended.

Even 100 years later, we reflect on the generations of men and women of America's Armed Forces who have demonstrated their willingness to put country before self; patriots who serve for the greater good and who don't seek glory or recognition or personal gain.

A day not meant for veterans alone, Veterans Day is a day for all Americans, because every citizen has a role in carrying the legacy and burden of freedom. Today, our nation honors the contributions of all of America's veterans - every soldier, sailor, airman, Marine and Coast Guardsman - who have selflessly answered our nation's call and gone on to serve in the name of liberty and justice.

Maintaining the strength of the American ideal requires courage, constant vigilance as well as sacrifice, and to every man and woman who has donned our nation's uniform, the more than 1.6 million members of the VFW and Auxiliary salute you for your service.