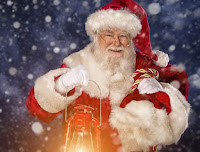 Santa will make his official visit to Wayne during Holiday Night at the Museum set for 6 until 8:30 p.m. Saturday, Dec. 4.

The traditional Christmas Parade will begin at 6 p.m. and at 6:30 the official welcome of Santa to the city will take place as he is presented the key to the city by Mayor John Rhaesa and members of the Wayne City Council. The official tree lighting ceremony will follow. From 7 until 8:30 the Wayne Historical Museum will open for children to meet both Santa and Mrs. Claus. A warming fire pit with Kurt and Angie Jarman of Kurt's Caps of Wayne will also be available.

In addition the event this year will include a petting farm, hot chocolate, cookies and children's crafts at Hill Crest Bible Church with costumed characters and a tree lighting ceremony. There will also be a food truck and a fire pits.

In addition to the Wayne Historical Society and the Downtown Development Authority, the event this year is sponsored by the City of Wayne, the DPW, Parkside Credit Union; St. Mary's Catholic Church, The Wayne Dispatch, and the Wayne Westland Federal Credit Union.