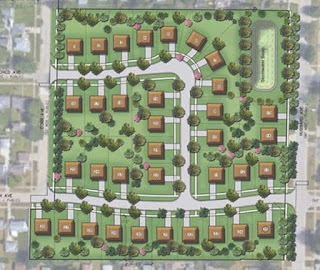 Members of the Westland City Council unanimously approved the two home developments proposed by Lombardo Homes during a regular meeting Nov. 15. At the 12.16 acre former site of James Madison Elementary School, on the east side of Carlson south of Avondale, the developer plans to construct 45 homes. At the former 9.06 acre site of Kettering Elementary School between Venoy Road and Hubbard Street, 35 new homes will be built.  Both schools were closed in 2011 by the Wayne-Westland Community Schools Board of Education due to declining enrollment.

City Council President Jim Hart said he had been an advocate of building on these sites for several years.

“I'm thankful the school district is working with you so we can get some new roofs out here,” he told Gregory Windingland from Lombardo Homes. Lombardo built Marlee Wood subdivision in the city, along with several other residential projects.

According to the plans submitted to city officials, the developments will each feature several ranch and colonial-style homes with attached two-car garages and full basements.

The developer will construct the necessary residential roadways in the subdivisions.

Not all the educational heritage of the property will be lost as two homes at the Kettering development will be built by students from the school district construction program. Windingland said the developer was “excited” about being part of that educational experience.

Councilman Jim Godbout commented that the success of the Marlee Woods project indicated the developer would have great success with the two new projects.

“This works well with those (nearby) homes,” Godbout said.