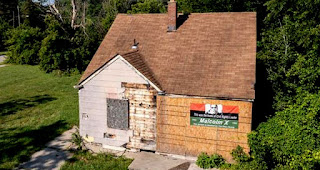 Anthropology students at both Henry Ford College and Wayne State University are looking forward to a planned “dig” in Inkster next spring.

The students will be among those professionals searching the area surrounding the home at 4336 Williams St., hoping to find artifacts and relics of the time civil rights leader Malcolm X lived in the home.  The renovation and preservation project will be funded by a $380,850 African American Civil Rights Grant  awarded by the Historic Preservation Fund as administered by the National Park Service (NPS), Department of Interior.

Local Inkster activist Aaron Sims, executive director of the non-profit organization Project: We Hope, Dream, and Believe (WHDAB), worked for more than 13 years to preserve the home where Malcolm X lived in 1952 and 1953 with his brother, Wilfred Little.

The ongoing effort attracted the attention of Henry Ford College anthropology instructor Dr. Tareq. A. Ramadan who wrote the winning grant proposal and who will be involved in the renovation of the home. Members of the Inkster City Council helped Sims' efforts by allowing him to obtain the home. Recently, his non-profit group has been able to purchase the lots on both sides of the house, which is to become a museum. A community center and job training/youth tutorial center is planned at another lot across the street which the group recently obtained. The plan is to celebrate the efforts of Malcolm X, a civil rights icon during the 1960s, through memorabilia and authentic furnishings.

In the spring of 2022, Ramadan will coordinate a joint archaeological excavation project between WHDAB and the Wayne State University Department of Anthropology to survey and excavate areas around the house. The goal is to have everything completed and open to the public by 2023.

Since the grant was announced in July, the property has been registered in the National Register of Historic Places (NHRP) and in late September, the State Historical Preservation Office Review Board unanimously approved the nomination - a critical step toward the home ultimately being listed in the NRHP.

“Construction and renovation of this home will begin in the spring. We'll be maintaining the house in the meantime and conducting more research. We'll also collect oral history of the home in relation to the rest of the neighborhood and compile as much information about the area, historically, as possible,” Ramadan said.