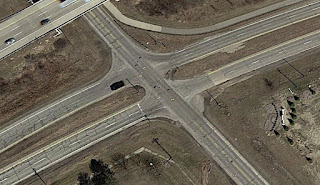 Romulus Mayor LeRoy Burcroff is not a man who gives up.

It has taken Burcroff nearly seven years, but his persistent attempts to have the traffic intersection at Northline and Hannan roads reconstructed have finally paid off. Construction at the intersection, a cooperative effort between the city and Wayne County, is expected to begin April 15 and continue until Sept. 17, dependent on weather.  The reconstruction, officials said, is a continued effort to improve road safety and reduce vehicle crashes.

For decades, the site has been an area of concern for Romulus residents, who have often cited the high accident rate in the area. When Burcroff became mayor in 2014, he began to meet with Wayne County officials to bring attention to hazardous road conditions at the intersection.

During the ensuing seven years, Burcroff and Wayne County officials have had frequent conversations about the need to repair the interchange. Burcroff even took county officials for a city-wide ride along to demonstrate first-hand shared jurisdiction roads in the city which need improvement.

The ride along demonstration proved effective as county and city officials eventually developed a plan to turn the boulevard intersection into a necked-down standard intersection with a traffic light.

“The improvements at the Northline and Hannan intersection will serve as a solution to a problem that has plagued our community for decades, making the roads safer for both residents and visitors alike,”  Burcroff said. “We're pleased to have a good working relationship with Wayne County and thankful for their partnership on this much-needed project.”

During the April to September construction, city employees will place a state-of-the art LED advance warning sign to direct traffic and reduce accidents.

Burcroff said the city is committed to the restoration and preservation of the infrastructure and has completed several road and sidewalk projects in recent years. In 2020, Romulus completed a sidewalk project on Van Born Road between Fourth Street and Washington Street, linking a dense residential area to the businesses on Wayne Road.

Romulus recently submitted a grant proposal to the Michigan Department of Transportation for alternative funding to place a sidewalk on Wayne Road between Van Born and Wick roads.

“It's important that our residents have access to a safe route to downtown businesses and residential districts,” said Romulus Department of Public Works Director Roberto Scappaticci.

“It's also important that our residents feel heard. If they come to the city with an infrastructural need, we do our best to address the issue at hand.”