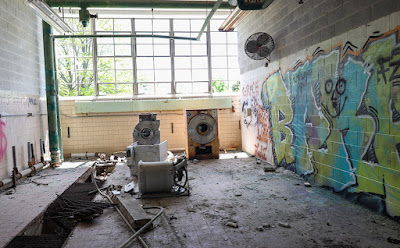 Northville Township is another step closer to making Legacy Park a reality. Within the next few weeks, crews will begin the demolition of all remaining buildings at the former state psychiatric hospital.

“We started the project to transform the former psychiatric hospital property several years ago, and with the demolition of the buildings starting this summer, the dream of Legacy Park truly comes into focus,” said Supervisor Mark J. Abbo. “Our residents have been patient, but the time for action is now.”

Members of the Northville Township Board of Trustees voted May 12 to award the demolition contract to Asbestos Abatement Inc. of Lansing to remove the 11 remaining buildings. The demolition contract is not to exceed $8,946,420, which is significantly less than township officials had projected.

“The removal of hazardous materials is very complex and can be cost prohibitive,” said Treasurer Jason Rhines, who owned a small business for 25 years specializing in construction and environmental remediation. “In order to properly plan for this project, we anticipated the cost to remove the buildings, including asbestos, could be as high as $18 million. But the Legacy Park Committee, township staff and our consultants worked very hard over the past year and a half, and we believe that played a significant role in the bids coming in as low as they did.”

Northville Township Director of Public Services Bob Belair will oversee the project. As required by the Michigan Department of Environment, Great Lakes and Energy (EGLE), the project will be closely monitored by a team of industrial hygiene professionals who will take samples, provide air filtration and implement all other necessary control measures to ensure that the air quality meets or exceeds the established government guidelines at all times during the project.

“The funding for the demolition and subsequent inspections come from the $12 million bond sale Northville Township completed in late 2021 before interest rates rose,” continued Abbo. “The township will repay the bonds with revenue collected by a Brownfield Tax Increment Financing (TIF) district created earlier. No money from the township's general fund will be used.”

“We recognize residents want these buildings down and our role is to do so in a way that is fiscally responsible and that's what we have done,” concluded Rhines.

Northville Township acquired the 332-acre Legacy Park property in 2009 after a millage election. It included 20 buildings, a water tower, a power plant and other infrastructure. The first buildings were demolished in 2012. The signature nine-story, 252,174-square-foot psychiatric hospital was demolished in 2018.