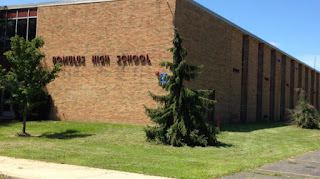 A group of graduating Romulus High School seniors are facing some disciplinary actions after they took their “senior prank” too far.

School officials said that at about 9:30 p.m. on May 25 a group of high school students entered the high school and did significant damage to several classrooms. The students were allowed into the school by custodians, according to the social media account, which describes the custodians as “complicit with the plan.”

According to district officials, “School security cameras clearly show one of the custodians letting the students into the building, custodial staff interacting with the students and custodians meeting as a group before they exited the building.” The vandalism has been referred to the Romulus police for investigation, officials said, and the contract custodial staff have been fired, according to the Facebook post.

“ A 'prank,' by definition, is a joke or trick. What was done to several rooms at Romulus High School was simply destruction. I am disappointed by the conduct of our senior students and outraged that grownups we trust with our building security knowingly helped them gain access to the building.

“We are working with Romulus Police Department on our response to this event. The students involved have been disinvited from the senior prom toast but will be allowed to attend the graduation ceremony.

“While this would have been actionable conduct at any time, the timing with respect to other school violence and security incidents around the country makes this 'prank' particularly appalling,” the unsigned and unattributed Facebook post continued.

“Senior pranks are regarded by many as a time-honored tradition. We encourage pranksters to recognize and understand there is a line. Do something clever, but legal. Malicious destruction of public property is not only a crime, it disrespects the very institution preparing to honor you with a high school diploma,” the post concluded.