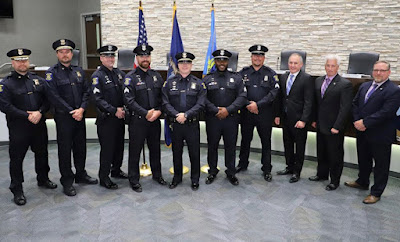 Little, now a lieutenant, earned an associate's degree in criminal justice from Kirtland College where he also graduated from the police academy. He started his career with the Hamtramck Police Department in 2006 before being hired by the Westland Police Department in 2009.  Miller has been a K9 Handler, member of the recruitment team, a member of the Wayne County Mobile Field Force Team, member of the Critical Stress Management Team and a member of the Westland Tactical Response Unit and was most recently been assigned to the Westland Police Special Investigation Unit (SIU), where he will continue to serve as the bureau commander.

New Lt. Sleep earned his associate's degree in criminal justice from Schoolcraft College. He was hired as a police officer by Westland in May 2007. During his time as an officer he was a part of the Westland Tactical Response Unit, a member of the sniper team and was the assistant team leader. He was also a field training officer and is a current member of the Westland Police Honor Guard, an instructor of active shooter response, ALICE, firearms, less lethal impact munitions, divisionary devices, OC/CS pepper spray and deployable devices, and counter ambush tactics. Sleep was promoted to the rank of sergeant in February 2019, and was assigned to the detective bureau.

Yudt is a Westland native who earned his bachelor's degree in criminal justice from Madonna University and graduated from the Wayne County Regional Police Academy. Prior to being hired in Westland in 2004, he worked one year for the Wayne County Sheriff's Department. Yudt has worked in the traffic bureau, the motor carrier division, is a trained accident reconstructionist, and was trained through the Michigan State Police as a drug recognition expert. He is a member of the Westland Police Honor Guard, a department instructor in Radar/Lidar and SFST and the new sergeant recently joined the Committee on Disability Concerns as the police representative.

Pettit grew up Westland and started as a Westland Police Explorer at age 13. He graduated from John Glenn High School before completing the Detroit Police Academy in 2007. He served the City of Detroit as a police officer for 5 years prior to coming to Westland. In Westland, the newly named sergeant has been an evidence technician, community police officer, a member of the crime suppression unit, a member of the Westland tactical response unit, and police sniper. Most recently he was assigned to the Westland police detective bureau.

Newly promoted sergeant Donald is a second generation officer whose father served with the Garden City Police Department. He attended Brevard College in North Carolina and played running back for the football team and then attended Valencia College Criminal Justice Academy in Orlando, FL. He is currently finishing his education at Columbia Southern University Online. Donald started his career as a cadet with the Ocoee Police Department and then as an officer with the Altamonte Springs Police Department in Florida. After he and family made the move to Michigan, he joined the Westland Police Department where he spent time working as a patrol officer, community police officer and most recently as the school resource officer for the Wayne-Westland Community School District. Donald is a field training officer, recruitment team member, and active shooter instructor for the department. He spends his free time coaching football at John Glenn High School and his son's youth baseball team.

New officer Alzayadi was born in a refugee camp in Saudi Arabia to two Iraqi parents, moved to the United States six months after being born, grew up in Dearborn and is a Fordson High School graduate. He is the third youngest of 10 siblings. He was a police service aide for two years, and then was promoted to a trainer position in the program. Alzayadi is currently working toward an associate's degree in criminal justice and graduated from the Wayne County Regional Police Academy in May of 2022. He is currently in the field training program.

New officer Allison was born and raised in Redford and went to Redford Union High School where he was a part of the National Honor Society and was a varsity member of the swim team, baseball and soccer all four years of high school. He went on to graduate from Wayne State University with a bachelor's degree in criminal justice and a minor in global studies. He began working for Westland as a police service aide in May of 2019 and was promoted to trainer position in December of 2020. He graduated from the Wayne County Regional Police Academy in May of 2022 and is currently in the field training program. When not working, he volunteers as a youth soccer coach for the club where he formerly played.

Westland Police Chief Jeff Jedrusik said he was proud of the officers and the department.

“Throughout the country law enforcement agencies are struggling with police recruitment. I am proud to say that we are still able to attract quality candidates. You can clearly see that after hearing the bios on our two new hires and our promoted lieutenants and sergeants. Another common factor is how so many of our police hires grew up locally. That says a lot for our community,” Jedrusik said.

“Over the years, we have seen a large number of new police officers come to Westland because they grew up here. We have seen that in our police department, our fire department, city council and even the mayor who grew up in Westland and went to John Glenn. This demonstrates the importance of programs, such as the Explorers and the PSA (Police Service Aide) program. These programs are helping to develop future Westland police officers,” the chief concluded.
Posted by The Eagle at 12:00 AM