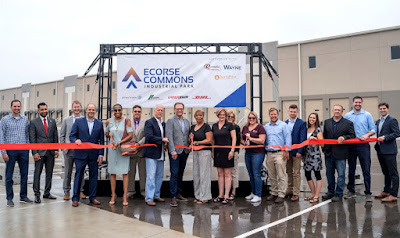 “We're thrilled to welcome LaserShip, Pitney Bowes, Hearn Industrial services and DHL to the Ecorse Commons Industrial Park and we look forward to continuing to see the positive impact these new businesses have already had on our community's local economy and workforce,” said Burcroff. “We strive to be a business-friendly community because we know developments such as the ones announced today will not only have a tremendous impact on Romulus' economy, but on the region and state's economy as well.” 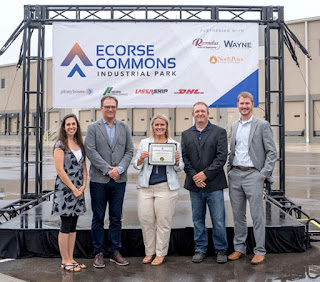 A total of 1,973 new jobs were created from construction and staffing post-construction as a result of the development at Ecorse Commons Industrial Park. Additionally, the businesses are estimated to have an economic development impact of more than $440,000 in annual tax revenue and $15 million in payroll revenue.

The four new businesses are the first companies to open in the Ecorse Commons Industrial Park, which is located at 37350 Ecorse Road and comprise two buildings totaling 654,887 square feet of industrial space. Located on 68 acres of land adjacent to the General Motors Powertrain Plant and 10 minutes from Ford Wayne Assembly, Ecorse Commons was developed in partnership between Northpoint Development and the city.

“Romulus has the vision to know that capital access, jobs and development are a good thing for their community,” Miles said. “I can stand here today and say that we are proud to partner with the City of Romulus on the development and announcement of Ecorse Commons. Romulus is an up-and-coming community, and Northpoint is pleased to be the jet fuel.”

The grand openings of LaserShip, Pitney Bowes, Hearn Industrial and DHL further demonstrate the rapid growth taking place across Romulus, with nearly 30 new businesses having launched in the city over the past 18 months as a result of FAST TRACK, an economic initiative implemented by the city to streamline the review and planning process, officials said. The 850,000-square-foot Amazon development is one that utilized the FAST TRACK program, as well as the 135,000-square-foot Kroger fulfillment center.

'When we think about what's happening here today in Romulus, it's about more than a $45 million dollar investment,” Rahal said. “This is an old Brownfield site that's going to create jobs and increase investments, creating revenue for the city, the county, the region and local schools. This is a phenomenal development for this community, and I'm thrilled to be here to celebrate its success.”