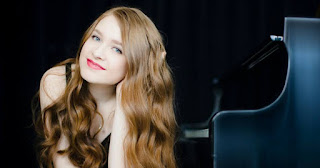 There is a Birthday Bash set for Saturday night at the Plymouth-Canton-Salem High School auditorium.

The Michigan Philharmonic will begins its 76th season presenting a live concert at 7:30 p.m. on Saturday, Oct. 2 with the “Birthday Bash” concert led by Conductor and Music Director Nan Washburn, now in her 23rd season. The Philharmonic opening night concert will feature the stylings of internationally-renowned c Rizikov, who first played with the Philharmonic when she was 12 years old, will perform “Piano Concerto No. 2 in C minor, Op.18” by Sergei Rachmaninoff

The 22-year-old Rizikov has dazzled the international arena as a child prodigy since she was seven, when she walked onto the stage of the Kiev Philharmonic Orchestra in a pink fluffy dress and huge pigtails tied with pink bows, sat down to the piano barely reaching the pedals, and played with a precision and maturity that transcended her age.

Ever since, she has astounded audiences and juries alike, competing with musicians over twice her age and winning many international piano competitions. Since her orchestral debut in Kiev, Ukraine, she has played in more than 40 orchestral performances internationally.

A new piece by composer Kristin Kuster, “Rain On it,” will also be showcased on the opening night as well as Edward Elgar's “Enigma Variations Op. 36” composed in 1899. Kuster is based in Ann Arbor where she is an associate professor and chair of composition at the University of Michigan School of Music, Theatre and Dance.

Several other special moments are planned for the evening to honor the Philharmonic's 76th anniversary, including a video, a dedication and a special piece not on the program for the evening.