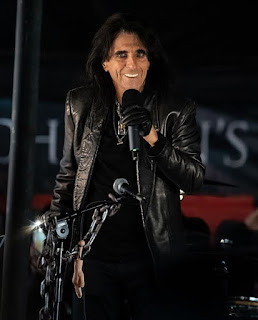 The damp, dark and gloomy weather set the perfect tone for the visit of rock star Alice Cooper to the former Eloise Psychiatric Hospital last week.

The visit, to help publicize the opening of the Eloise Asylum tomorrow, also marked the renaming of a section of road as Alice Cooper Court. Cooper's celebrity brought out city officials and radio hosts from WCSX to mark the dedication of the road and the opening of the $1.2 million Halloween creep show.

The asylum, set in the 30,000 square-foot former Kay Beard Building on the grounds of the former psychiatric hospital, features what is described as “innovative high tech horror.”  Jay Kays, director of operations, said owners hope it will become the “Disney of haunted attractions.”

Westland Mayor William Wild was quick to explain that the city took no official action on the ceremonial renaming of the street for Cooper as the roadway court is located in a private commercial development. Cooper, a Detroit native, told the enthusiastic crowd, “I love that they're naming streets after rock stars. I think there are more rock stars than politicians.”

The new attraction features multiple live actors who welcome “new patients” to the 40-minute experience that expounds on a sinister storyline that takes them from the dayroom into bloody operating rooms, creepy hallways and other eerie sections of the building. As they travel deeper into the meticulously recreated spooky hospital areas, the scenes get more and more frightening. The sets are based on the original hospital rooms and the experience is not a standard Halloween haunted house. Kays said it is an immersive experience designed to frighten and took two years to plan and create.

There is another section of the horror show in the basement of the building which courageous visitors can also visit.

Kays said that a portion of the $40 admission to the Eloise Asylum will be used to help support families who are currently sheltered at the Samaritas Family Center, an emergency shelter in the former commissary building on the Eloise property.  He added that there is a $65 VIP option which will allow visitors to forego standing in line or waiting to be “admitted.”