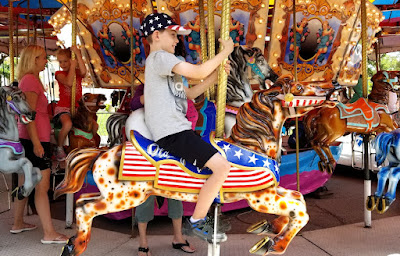 This will be a bittersweet Fall Festival for Eric Joy.

Joy, who has served as president of the civic event for 12 years, has announced that he is leaving the volunteer position to move on to other things in his changing life.

“It is just time,” he said. “I think it is time to give someone else a chance. Maybe they will have new ideas,” he said.

Joy, who comes from a family dedicated to community service, has been involved with the Fall Festival for much longer than he has been president. He worked the event for many years as a volunteer under other leaders, eventually agreeing to take on the full responsibility for the event.

Public service is ingrained in Joy's nature and he and his family are all active in community volunteer work. Before Joy, a lifelong Plymouth Canton resident, became president of the Plymouth Noon Rotary Club, his father, Tim, who remains a very active member, was president of the group. His mother, Penny, now serves on the club board of directors and is active with her own volunteer effort, Days For Girls, which provides necessary hygiene products for African women and girls.

He also recently became the squadron commander at the local Civil Air Patrol, a group he wants to spend time more time enjoying.  The group, originally formed during World War II, is an organization of airmen committed to service and to mobilizing the local civilian aviation resources for national defense service. When Joy joined about 20 months ago the group had a “temporary” commander, who left. Since then, two more commanders have left the group, when they are supposed to stay in the rank for 4 years. Joy said he took a deep breath when he last commander left, and accepted the job.

“I was sort of 'voluntold' that I was the new commander,” he said.  He said he has been playing a lot of catch up with the group as most commanders have been with the organization for five or 10 years. That, he said, has left him in a position of learning a lot in a very short time.

That impacted his decision to move on from the Fall Festival job, which this year, has been focused more on safety practices than ever before.

“We still have hand sanitizer stations and the booths and clubs are all really stressing health safety,” he said. “We are watching the Delta variant very closely to make sure we keep everyone safe.”

Joy said his one frustration with the Fall Festival has been constant every year and will continue to plague whomever volunteers for the job.

“It's the unknown. It's the weather. You have to have such a balance so that all the booths do well. It can't be too hot, it can't be too cold and it just cannot rain or storm or you're done,” he said. “That is always the stress of the event,” he said.

Joy said, however, that the most enjoyable aspect of being the event president was the time he spent working with the various charities, clubs and groups who participate.

“That was fun,” he said. He added that he considers his tenure with the Fall Festival a success in his life because he has left the organization in far better financial condition than when he took on the leadership of the event.  He explained that the city does not pay or fund the Fall Festival. It is an independent operation and has to be self-sustaining financially to survive.

Joy said he is looking forward, too, to a little more time with his wife, Dawn, and his four children, who range in age from 13 to 19. The family also has two new puppies, a pug and a German wirehaired pointer. Joy said his position in the family business,  Christensen's Plant Center, in Plymouth, also is keeping him very busy but said he will remain active with the Rotary Club.