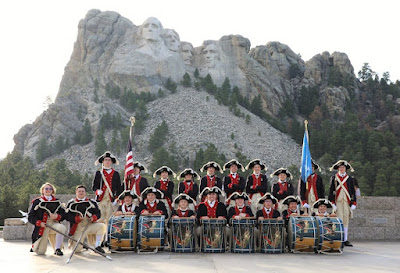 For more than a half a century, members of The Plymouth Fife and Drum Corps have brought the history of America to life.

Founded in 1971, the corps members continue to represent the tradition of America across the country with an educational tour of the eastern United States, performing at historic sites. This year, Corps members travelled west for the first time to perform at Mount Rushmore and at the Gateway Arch in St. Louis, Missouri.

This dedicated group of 12-18-year-olds practices Monday evenings at Salem High School beginning in January.  They practice marching as a group and in separate sectionals for each instrument - fifes, drums and guard.

The Corps prepares a special routine each year which is performed at each of the sites on the tour.  The Corps members not only learn about American History at each performance site, but they also interact with members of the local community and proudly represent their hometown of Plymouth.

The Plymouth Fife and Drum Corps members travel extensively every year performing in numerous parades, historical and patriotic celebrations, concerts, and other civic events in Plymouth, throughout Michigan and across the United States.  The Corps members traditionally perform in both the Plymouth Good Morning USA Parade on the Fourth of July and in downtown Plymouth, march in the Northville Independence Day Parade, perform at Kellogg Park and at the Plymouth Fall Festival.

This year, the Corps members will be at the Plymouth Fall Festival selling roasted almonds to raise money to continue performing throughout the year.

More information about the Plymouth Fife and Drum Corps, including videos, pictures, and a calendar of events, can be seen by visiting www.pfdc.us.

Members of the Corps celebrated the 50th anniversary of the founding of the group with a recent reunion at Plymouth Township Park. Alumni from many years of performances and from across the United States gathered to celebrate and reunite with former Corps members.