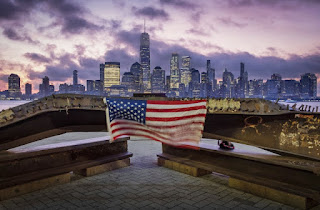 Canton Township will be the site of a special memorial ceremony to honor and remember victims of 9/11 on the 20th anniversary of one of the darkest days in American history. This special tribute will take place starting at 9 a.m. on Saturday, Sept. 11, at the Heritage Park Amphitheater, located directly behind the Canton Administration Building.

The memorial ceremony will be led by Canton Supervisor Anne Marie Graham-Hudak, who will be joined by Canton officials and members of the Canton Board of Trustees. The ceremony will also feature the Canton Fire Department Honor Guard, remarks from Canton Public Safety staff members, a musical tribute by Devyn Rae, and a moment of silence.

“We felt that it is so important for the Canton community to honor the milestone 20th anniversary of 9/11 with a memorial ceremony,” stated Graham-Hudak.  “We will never forget all those who died on Sept. 11, 2001, in the coordinated terrorist attacks on the World Trade Center, the Pentagon, and in Shanksville, Pa., where hijacked United Airlines Flight 93 crashed before it could reach its destination in our nation's capital. This ceremony in Heritage Park will commemorate the people, the heroes, and all of the lives affected by Sept.11.”

Speakers from several area organizations will also speak about the impacts of these horrific attacks and address how hate crimes continue to plague certain cultures. Participants are invited to leave messages of hope that will be added to the Canton symbolic version of the Survivor Tree, which is the severely damaged pear tree that was discovered at Ground Zero and rehabilitated. Today the tree stands at the 9/11 Memorial in New York City as a living reminder of resilience, survival, and rebirth.

Participants will be required to follow all CDC and Michigan Department of Health and Human Services guidelines at the time of the event.