Safety is main ingredient at Rotary 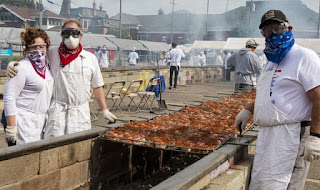 The Plymouth Fall Festival returns this weekend, Sept. 10, 11 and 12, bringing many of the traditional events that attract thousands of people to the community each year.

Tickets are already on sale for the traditional Plymouth Noon Rotary Club Barbeque Chicken Dinners, a mainstay of the club.

This year, the festival and the barbeque will have an added concentration on safety and health precautions.

“We are keeping a very close eye on the Delta Variant,” he said. “We want to be sure everyone is safe.”

This year, the Rotary chicken barbeque will benefit from the wisdom of legendary experience brought by one of the youngest-chairman ever.

Brandon Bunt, who joined the Plymouth Rotary Club at 23, is the chairman of the barbeque committee for the club. This year, Bunt has overall responsibility for the barbeque. In the age of COVID, that required a lot of extra precautions and some changes in the way things are being done, he explained.

“We are really emphasizing all safety and health precautions, even more than usual,” Bunt said.

Bunt was sponsored into the club and mentored by Howard Oldford, one of the oldest and longest serving members of Rotary, who had a very proprietary interest in the barbeque and was there every year, ensuring the success of the event. He was known for his constant analysis of the procedures involved in producing 11,000 chicken dinners in one afternoon.

“I have participated in the barbeque, with Howard, since I was in high school. While I only began working my way through the committee six years ago, I have been involved in the barbeque for decades,” Bunt said. He recalled that Oldford was constantly striving to improve efficiency of the barbeque operations and would constantly collect data, demanding to know the temperature of the chicken 15 minutes after it left the grill and exactly how long each step in the preparation took. “He was a legend at the barbeque,” Bunt said.

“Howard sponsored me in the club in 2010 and I think I was the youngest Rotarian then,” Bunt said. “Howard was my friend and my mentor in so many ways and we developed a life-long friendship,” he said. Oldford, the owner of Northville Lumber, mentored and advised Bunt when he began with Rotary and eventually became the Rotary Club Interact President at Salem High School. Oldford, Bunt said, advised him during the start of his first landscaping business while he was still in high school. After graduation, college and marriage, Bunt sold his landscaping business and subsequently began a new career as a founding partner of Trilogy Corp. which handles cleaning and sanitation for large corporations.

“My other mentor was Tim Joy,” Bunt said, “the owner of Christensen's, another very successful guy and an active Rotary member.”

Bunt doesn't hesitate to credit his business success to his mentors along with his continued dedication to the Rotary Club.

“I often think people may not know all the things funded by Rotary in the community. We award scholarships to college and trade schools and fund so many social and cultural services,” he said. The chicken barbeque is the main fundraiser for the club, Bunt said, and the money goes directly back into community services and scholarships.

Each member of the committee works their way progressively through the various posts of responsibility until, after five years, they take on the responsibility for the entire project, overseeing every aspect of the barbeque, which is a momentous task by any measure. The new safety precautions added even more responsibility to the task.

“This year, for safety, we have cut the number of community volunteers from 1,000 to 500. We had to find ways to do things more efficiently to have more safety controls,” Bunt said. “We will have the 100 or so Rotary Club volunteers, along with some of their family members, all aware of the safety procedures,” he said. 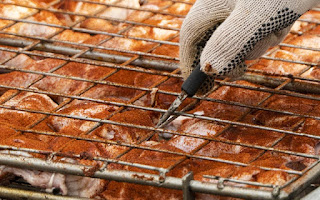 This year, the club hopes to sell all the dinners cooked on the huge charcoal barbeque pits they build Saturday night in the parking lot behind The Gathering. Bunt said the club usually donates a number of dinners to local charities but this year will donate to those civic and social groups in more concrete ways using funds from the sale of the dinners.

This year, for the first time, the dinner boxes will also be sealed, adding another layer of safety, he said.

Bunt and his wife, along with their 2-year-old son, now live in Milford, but he is still loyal to the Plymouth Noon Rotary Club. The couple is expecting twins, a boy and a girl, two weeks after the barbeque.

“Yes, it's a lot of work,” he said, “but the best years of my time in Rotary have been my time on this committee.”

Advance sale dinner tickets are available from most Rotary Club members for $12. Tickets the day of the event are priced at $14. Meals include a half chicken, roll and butter, corn on the cob, a cookie and a bottle of water.